Many people have been wondering what’s going on at the corner of Fairview and Harrison Bridge Roads.  Here are the details, courtesy of a Press Release issued today:

The Martin Family Farm has a long and storied history in Simpsonville dating back to the late 1800’s. In the early 1990’s, J.R. (Bob) Martin recognized the growth and development in Simpsonville as an opportunity. He told the family “you can’t stop progress. Change is inevitable, but growth is an option.”  Mr. Martin, a man who valued trust and integrity, worked with Windsor Aughtry Company to sell the northeast and southeast corners of the intersection of Fairview Road and Harrison Bridge Road and to later land lease the northwest corner of the property.  The southwest corner stood untouched as Mr. Martin vowed to remain in the house that stood on Martin Farms. He did so until his passing in 2011 at the age of 86 years old.

The Martin family was immediately approached by developers regarding the last undeveloped corner. Through lots of thought and prayer, the family decided to honor their father’s vision of growth. When it was time to choose a developer, the family turned again to Windsor Aughtry Company, the company that Mr. Martin had first worked with over 20 years ago.

It was important for the Martin family to not only retain ownership of the land, but for the new development to also honor the history of the farm. The development, which will feature 120,000 sq. ft of anchor and junior retail space, 9,600 sq. ft. shop space, and 6 outparcels, will incorporate special and unique features from the farm. Bricks from the home in which Mr. Martin lived for 80 years were carefully salvaged to be used in signage. An old water trough for the cows, stones that served as benches, and even the headstone of the first horse, Fairytale, were also excavated and preserved to be featured in the development.  The silo, an iconic landmark which stood prominently on the land, was not structurally sound but will be replicated on the property. Even the development name, Grand Central @ Martin Farms, is a nod to the old family nickname for the farmhouse. The whole look and ambiance of the development will be reminiscent of Martin Farms.

Publix Super Markets, working with JSI Development,  is the first Grand Central @ Martin Farms tenant to announce plans for the new development. The grocer will be vacating their existing store on Fairview Road  and will occupy the 54,000 sq. ft. anchor store in the development.  A junior anchor and out parcels will be announced at a later date.

Work on the development has already begun; the Publix  is anticipated to open Fall of 2017. 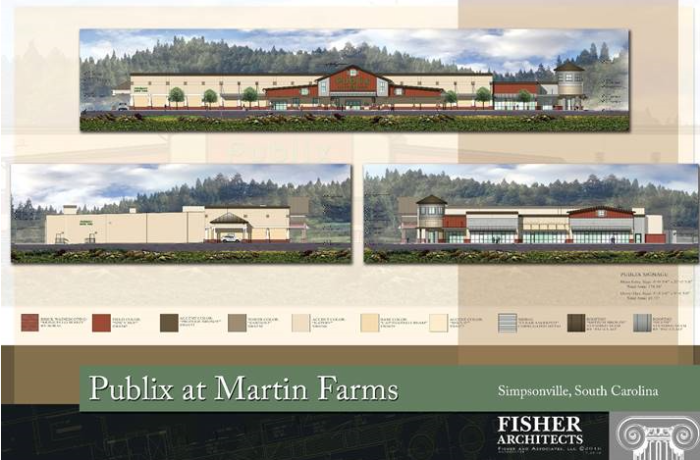